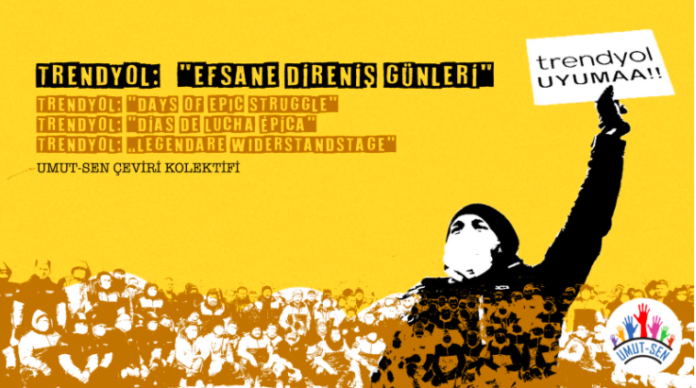 In Turkey as elsewhere, the gig delivery economy has become a means for private companies to offer flexible employment without benefits under the false pretense of “business partnership” while compounding their profits. Although gig delivery workers are lured by the freedom of choosing their own working hours, earning at higher rates and “becoming their own boss,” they increasingly find themselves in precarious situations where they themselves pay for insurance, and the installed payments and expenses of their delivery vehicles on minimum-wage paychecks.

70% of those employed by Trendyol are college graduates, mainly young men. In the last ten years private universities have proliferated nationwide. Correspondingly, public universities have expanded their admission quotas. The spread of access to higher education has undoubtedly been a gain for young people on the brink of graduating into the market economy. However, the state’s project has not exactly been to democratize higher education. Instead, it allowed for the ruthless privatization of higher education while suffocating research and freedom of thought at public universities and imposing arbitrary performance evaluations on their faculty. Almost every faculty line was pushed to seek external funding to conduct research. Young people–18 years old and therefore bearing the potential to make trouble for the system–were forced to spend two to four years at these hollow universities, pacified by their distance to the labor market. Like elsewhere, the youth of Turkey are also realizing how little the future may hold in store for them when they would have been climbing up in their careers only ten years ago. Gig delivery workers feel the need to revolt and organize as they realize how trapped they are in this economic predicament. Taking rightful offense at having been pulled to the bottom of the capitalist food chain, workers not only fight for better pay, but also for dignity at work.

Trendyol is the quickest company to be valued at 10 million dollars in Turkey. Founded in 2010 by Demet Mutlu and valued at 1 billion dollars in 2018, the company soared to 16.5 billion in 2021 after the Chinese multinational technology company Alibaba became a main investor. What is more, branching out into e-commerce, online grocery shopping, and food delivery, Trendyol grew by 600% last year, accounting for 30% of the entire Turkish market. According to 2020’s data, Trendyol distributes nearly 1 million products per day, with an annual sale of 347 million products. While the company has grown 16 times in the last four years, a pay increase of 11% was imposed on gig delivery workers. Trendyol’s workers whose monthly gross salary was 9000 TRY [625.90 USD on March 7, 2022][1] + VAT received net wages between 2500-3000 TRY [173.88-208.66 USD] after the latest price hikes in fuel, vehicle expenses, and other relevant expenditures. The wages, which were far below the minimum wage, intensified the sense of worthlessness among the gig delivery workers. So, the protests began on January 26th when the Trendyol administration announced a diminutive pay increase, keeping its workers way below the poverty line.

When the gig delivery workers blocked the headquarters of Trendyol with their vehicles for the first time, this came as a shock to many and arrested public attention. However, while this direct action might have been unexpected for some, we had already been holding meetings with Trendyol workers since September 2021—mainly in Istanbul—who had reached out to Umut-Sen to strategize for the aftermath of the expected announcement of pay increase. Hours before the first action, we met with Nakliyat-İş [Revolutionary Union of Transport Workers], a combative branch union of DİSK [Confederation of Revolutionary Trade Unions of Turkey]. They had strong ties with some of the other branch unions of DİSK. Together we quickly identified the most efficient mode of communication with representatives from all branches according to our security/confidentiality criteria. We emphasize Istanbul on purpose due to its urban density, where halting 60-70% of delivery service made victory imminently possible. On the other hand, because there are more job opportunities in Istanbul than the countryside, workers in the city could take more risks with their actions against Trendyol.

Trendyol workers used a Telegram group, by which legal documents and other relevant information were disseminated to 2000 members from across Turkey. This group was actively used during the three-day resistance. Among the group members were: Trendyol executives, journalists, members of various unions, and representatives of political parties. It was open to everyone and was not a decision-making body. We realized that our communication on this medium was at times too scattered. The schedule and the content of the protests were shaped collectively with the representatives of the Trendyol branches, mainly those in Istanbul. Then, the action plans would be shared with everyone else on the Telegram group. As Umut-Sen, we facilitated the communication and coordination between different branches of Trendyol, hoping to ease off the pressure on the striking workers and solve any problems along the way.

There was heavy snowfall in the first two days, and Trendyol administration tried to manipulate public opinion by claiming that workers could not work due to inclement weather. Regardless, workers succeeded in halting up to 90% of the distribution work in Istanbul. In other parts of the country, workers pointed to weather conditions to minimize their risk of being fired while stopping work, and raised their voices by parading in convoys of vehicles. On the second day of the resistance, we identified two addresses—one on the Anatolian side and another on the European side of Istanbul. In these locations, workers came together with the Assembly of Representatives. Workers gathering in convoys of vehicles in the Maltepe-Yenikapı meeting area—on the European side—was a testament to the scale of their resistance. In other parts of the country, we organized press releases and convoy parades in city centers. The collective mobilization of workers created an opportunity for us to share our demands with working people across Turkey.

The fact that almost all Trendyol gig delivery workers are active Twitter users made it possible to share the voice of the street protests directly with the public. The “Trendyol Employees” [Trendyol Çalışanları] Twitter account, which we created with the employees, once again played a central role in increasing the visibility of the protests that took place in many cities. Approaching the end of day-two of the resistance, the regional managers of Trendyol finally began to treat their so-called “business partners” as workers: rumors floated that the contracts of those who do not work for two consecutive days would be terminated. The direct and timely involvement of the Umut-Sen Law Collective—by listening to workers’ concerns and answering their questions on live broadcast—outsmarted Trendyol’s attempt to break the resistance.

On the second day of the resistance, with the workers’ assembly of representatives, we called for a mass protest in front of Trendyol Headquarters in Levent, in the heart of Istanbul. We recognized that bringing the collective anger from the streets to the footsteps of Trendyol’s management team would put extra pressure on the company. At this moment, the management made a critical move, and called all of its employees to the branches at the same time. Claiming that the management would make an announcement on Zoom, they were attempting to disperse the protesting workers. Indeed, this critical move reduced the number of workers gathered in front of the headquarters. The announcement got postponed several times as they gauged the pulse of the crowd. Eventually, the management made a statement arguing that there had been a misunderstanding in the first place, and that they were granting a 38.8% pay increase (12.500 TRY [869.36 USD on March 7, 2022] + VAT). However, delivery workers were not fooled by how Trendyol sought to control the narrative in bad faith. They had strategically and collaboratively stopped work for days, claiming the victory as theirs only—not a benevolent gesture from the company management. Trendyol delivery workers actively worked to dispel Trendyol’s narrative and spread the word that this raise was hard earned by the organized workers.

Still after this big victory, Trendyol workers, Umut-Sen and Nakliyat-İş [Revolutionary Union of Transport Workers] continue to hold meetings to strengthen the unity of workers, still deliberating on what is the best form of organization for gig delivery workers in Turkey moving forward—a cooperative, an association, or a separate union.

The hard-won victory of Trendyol gig delivery workers had a critical value as it revealed that when workers—whose wages lost value immensely due to high and fluctuating inflation—act together, even the world’s biggest companies can bend to their will. The year 2022 started off with high morale for workers in class struggle. The fact that the protests of HepsiBurada, Aras Kargo, Yurtiçi Kargo, Scotty, Yemek Sepeti and Digiturk workers were kindled right after the Trendyol protests played an important role in the Trendyol victory. This process exposed in Turkey that the global gig economy is not an escape from the system, but a maneuver to erode workers’ rights. Furthermore, workers showed that delivery and transportation work is of utmost importance just like the metal or logistic sectors; they have a significant power to disrupt business in the center as well as in the peripheries of the city; and that thanks to their vehicles, they can swiftly come together, and organize if they want to. Those who know how to learn from others learned a great deal from workers across the country who organized using new communication technologies; gained the capacity for collective action in the act; instinctively figured out and endorsed a disciplined form of action, and confidential processes of electing representatives. Yet above all, workers allowed for the emergence of one fact into the consciousness of the workers’ movement: those who organize and struggle win.

*The title echoes Trendyol’s frequent sale announcements under the name “Days of Epic Sale.” This opinion piece was written collectively by the members of e-komite independent magazine, and first published in Turkish on March 6, 2022. URL: https://e-komite.com/2022/trendyol-efsane-direnis-gunleri-komite-dergisi/.

[1] For official numbers, please see the official website of the Central Bank of the Republic of Turkey: https://www.tcmb.gov.tr/wps/wcm/connect/tr/tcmb+tr/main+page+site+area/bugun